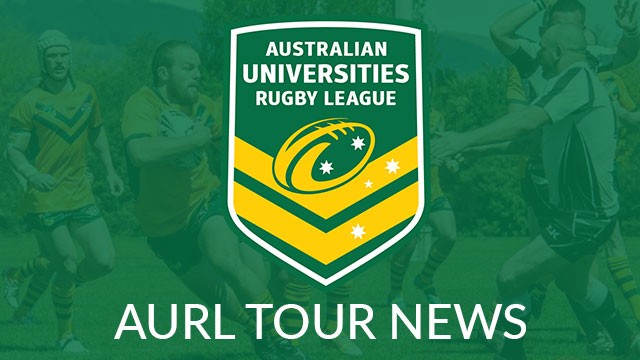 The third match of the Fiji Tour was played Saturday 19 October at Bidesi Park, Suva against Fiji National University and resulted in a 64-6 win to the Aussies.
Played in hot conditions the tourists were off to a great start scoring early when Sean Dermba gathered a short kick by Ryan Cameron to cross. Slick passing from Matt Sheppard soon saw Jack Cross score down the right edge and converted by Dylan Izzard, the Aussies held a 12-0 lead after only 10 minutes.
Soon after a kick through from Alec Bush gave Cross his second try and it was not long before some great ball work put Izzard through to race 60 metres to sore.
At the 27th minute mark big Harrison Leonard crashed over under the posts and soon after Declan Morrissey leapt high over his opposing winger to score in the corner.
But the NFU side never gave in and late in the half sustained pressure on the Aussies defence saw them score just before the break. Half time AURL ahead 36-6.
Six minutes into the second half Dermba, displaying great footwork, scored his second try out wide and set the tone for the Aussies who continued to score freely for the remainder of the match (which was stopped 10 minutes before full time due to failing light).
AURL 64 (Tries: Sean Dermba 2, Jack Cross 2, Matt Sheppard 2, Dylan Izzard, Harrison Leonard, Declan Morrissey, Harrison Graham, Trent Peoples; Goals: Dylan Izzard 9, Jack Miers) defeated FNU 6
Players Player: Matt Sheppard